A few weeks ago Emma and I got a second dog, Kip, to keep Bolt company. Kip is about 10 months old and is full of energy so we've been easing him into running with us. Friday was a very rainy day and although the dogs had been let out a few times during the day they didn't get much exercise so by the time I got home from work they were ready to release some of that pent up energy. 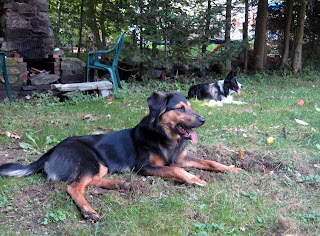 I've only run with both dogs once before, and that was on trails so they were both off leash, but since it was 6:00 PM, dark and rainy I decided to stick to some of the quiet roads in my neighborhood and keep the dogs on leash. I was a bit worried that the dogs would just take off and leave me standing there with two bloody stumps where my arms were once attached, but after the initial yank they settled into a reasonable pace pretty quickly. Since the sprints at the TMR TNR seemed to set me back in my recovery from the Mtn Epic I was hoping this would be a nice slow run, but the first mile was 7:35 which felt a little too quick for recovery, especially after spending all day sitting down. I guess I let the dogs get carried away with the pace too much. 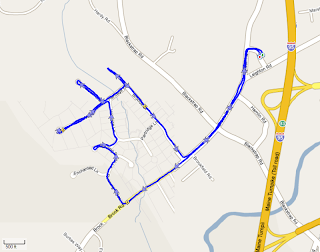 The remainder of the run was at a more sensible "recover" pace and I was impressed that the dogs did a good job understanding that the purpose of what we were doing was to run in a straight line (more or less), at a consistent pace that was dictated by me and that they weren't supposed to be jumping around and playing games. I think we all had fun, but I'm sure it would have been even more enjoyable if we'd been on trails unleashed. 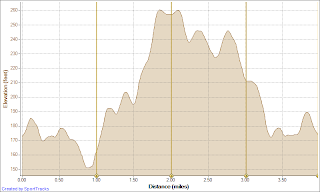 I've run with my dogs much less this summer, mostly because the first two miles they're pulling me and the last 2 I'm pulling them. Everything in between is perfect.