First half flat, second half hills

The plan for today was 20 miles, 10 on either side of the road at Bradbury, but I knew from recent weeks that my plans don't always work out. The last few "long" runs have ended up being shorter than planned, partly due to shitty spring conditions making 17 miles feel like 22, partly due to just not feeling like I wanted to go that long on the day. I was feeling particularly motivated today since earlier in the week I signed up for the Virgil Crest 100 in September, this was just the kick in the ass I needed to make sure I start to step up my mileage.

We had an unusually large group today with lots of new folks, or old folks who haven't been around in a while, joining us. It might have something to do with the new TMR website I launched earlier in the week, I didn't actually ask anyone. I set off at what I thought was a fairly conservative pace for a long run but immediately found myself in the lead of a group (Stephen, Brent, George, Kevin, Steve) that pulled away from the other 10 or so people. 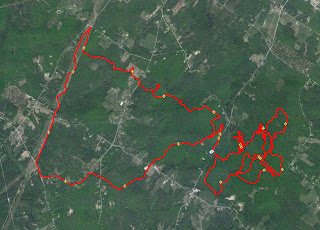 For the first half of the run we started out on the east side and ran the 'Reverse Bruiser Minus the O-Trail' loop. I was surprised to find the single track trails in pretty good condition with very little snow and not too much mud. There was one flooded area but apart from that the feet stayed relatively dry. I had forgotten how slow single-track can be, but it was a lot of fun running these trails again.

We finished the east side loop in about 1:40 and had a distance of 9.75 miles, close enough to the planned 10. I was feeling good and didn't think I'd have any trouble continuing along as long as my second loop worked out in terms of distance. For the second half of the run I wanted to get some decent hills in. No matter which direction you run the Bruiser course it's pretty flat. Stephen and Brent joined me for the first 1.5 miles of the next part of the run but headed back since they had already been out for an hour before the rest of us showed up this morning. 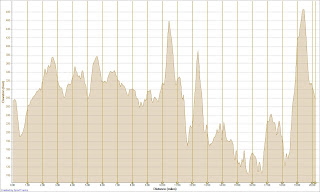 After taking the Terrace Trail almost all the way up to the summit of Bradbury we dropped back down to the Boundary Trail where I turned off and headed along the Bradbury-Pineland Corridor towards Tryon Mountain. Up Tryon, down to Lawrence Rd, over the new bridge that crosses Chandler Brook and eventually coming out on the power lines. I ran the power lines for about 2.5 miles through a mix of mud and dry grass. Some of the mud was really quite spectacular: 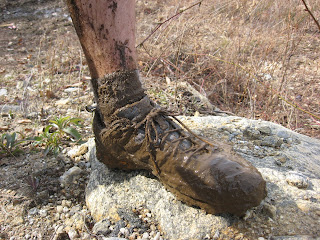 I noticed that when I hit 15 miles I had been out for 2:36 and was on some of the same power line trails as the Beautiful Loop, a 15 mile loop on snowmobile trails that I was able to run faster than this. I guess snowmobile trails are a lot easier to run than technical single-track.

From the power lines I turned onto dirt road and passed some highland cows, then back onto snowmobile trails where I prepared myself for the last, but biggest climb of the whole run. Part of what I like to do to help mentally prepare for a long race is plan training runs that have particularly difficult challenges right at the end so I can try to re-create that end of race feeling when I want to stop but push myself through it anyway. I actually enjoyed the long climb this time, moreso than some of the other times I ran it this past winter. 350 vertical feet in 1 mile may not sound like a lot, but at 18 miles into a run it felt like a pretty serious hill. when I topped out at the summit of Bradbury I was at 19.5 miles and very relieved that I could easily get over 20 without having to do laps of the parking lot at the end. I took the Terrace Trail down which is a blast to run fast on, although at this point I wasn't moving all that fast it certainly felt that way after my long climb. Funny how a 9 minute pace can feel fast, but that's what happens after a 12:19 mile.

I felt pretty good at the end, especially after the downhill finish. I'd like to think I could have kept going, but I was satisfied to finally finish a long run feeling good. 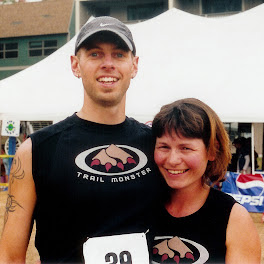