My Blizzard began on Saturday morning when I met Ryan at the park to scope out the trails for Sunday's race. Due to variable snow conditions over the past few years we've had to change up the race courses on short notice before each race in order to take advantage of the best conditions. We've finally got enough snow to work with on all of the trails so Ryan decided it was a good time to return to the West Side of the Brad and came up with an ass-kicking course that is similar to the Breaker. We donned our snowshoes and set off at an easy pace around the mountain. Conditions were variable, from snowmobile trail to packed single-track to unbroken trail. We paused along the way to pick up downed branches, plan the best route and doubled-back here and there to better define the course. After nearly an hour and a half we had covered a little more than 5 miles and had a good course defined. 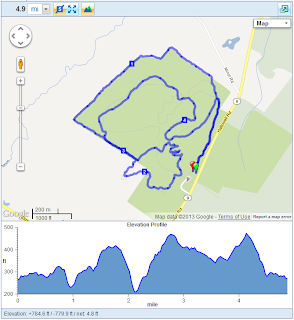 Even though this is a step-down week in my 100 mile training I had to get in longer than a 5 mile snowshoe run so I planned to make two more passes of the course. This would serve as a pretty solid training run, especially given all the hills on the course, and also help to get the race course better tracked before the race. After last week's 36 mile run at Val's Fat Ass 50k I wasn't sure how much energy I'd have for a 3+ hour snowshoe run so I made sure to fuel up well before and during the run. On the second lap of the course I didn't have to stop like we did on the first time around and I managed to complete that loop in 1 hour and 1 minute. After another brief stop at the car to refuel I headed out for a third time. By now it was about 11:00 and the temperature was on the rise, well above freezing. The snow that I'd been packing down was actually starting to soften up, at least in the sunnier spots on the course. I tried to maintain a consistent effort throughout, walking the steeper uphills and letting gravity do its thing on the downs, and I managed to knock out the third lap in 1 hour even.

Generally I was feeling pretty good physically, but more importantly I was feeling really well prepared for the race mentally. I always feel like I have some kind of advantage going into the snowshoe races since I'm pretty much the only one racing who knows the course, but anyone is welcome to come out for the course recon the day before.

On race day Ryan and I got to the park at 7:30 to mark the course, the temperature was right at 32 and it was nice to find that the trails had firmed up overnight with the colder temps. Of course this was going to change in the hours before the start of the race, but it made things easier for getting around the course. We split the course and each covered about 2.5 miles at an easy pace while placing flags and arrows as we went. After a quick wardrobe change we set up registration and the start & finish lines and then relaxed for a bit while the racers arrived and got themselves checked in and ready to go. At about 10:30 my stomach was rumbling. I hate racing hungry, but it was a bit too close to the start to eat anything solid so I decided to drink an Ensure that I had in my bag, a leftover from last week's long run. I usually find that it's pretty easy to run right after drinking one of these since I use them in ultras, but this was the first time I've ever had one right before a short race where I was going to running at a much higher level of intensity than in an ultra. Perhaps I shouldn't have downed the whole thing, 350 calories is a lot to handle, but at least I wasn't hungry any more.

I had time for a short warm-up run, it doesn't take long to get your heart rate up when running in snowshoes, and a little time to regret that Ensure. A crowd of 59 runners lined up at the start and after a few announcements and warnings about fun and potentially dangerous course features from Ryan - who was taking part in the race today - we were off and running. I decided to go out at a somewhat conservative pace at the beginning, knowing that this was a comparatively long snowshoe race, that the hilly terrain would naturally spread out the field, and that the trail conditions would allow for passing. When we left the field and entered the wooded trail I was in 6th place. Not surprisingly Jim Johnson was out in front, with (perhaps not in the right order) Doug, Jeremy, Scott and Andy in between. I was right on Andy's heels but didn't want to make a move too soon, I needed to suss out how he was running today.

By about 1/2 mile in I figured I was capable of going a little harder on the downhills that he was, so I waited until we came to a short, steep downhill on the Boundary Trail. I stepped just off the beaten path and launched myself off the drop-off, hitting the ground and weaving back onto the trail barely missing a tree. The momentum from this move allowed me to close the gap on Scott by a bit. As we neared the bottom of the hill on the Boundary Trail it sounded like Scott said something to Doug who was right in front. Doug moved right around a tree and Scott went left, I put in a surge and followed Scott to move past Doug. The snow was pretty soft on this descent and it took everything I had to maintain balance as I negotiated the hill, the bumps, the turns and the speed.

On the steep climb that followed along the back side of the mountain Scott started to pull away. We were only 1.5 miles into the race, still plenty of trail left and I figured as long as I kept him in my sights I'd have a chance of catching back up on the next big downhill. I could also see Jeremy ahead and figured that Scott was working hard to try and catch him. At about 1.75 miles we turned on the South Ridge Trail which begins a gradual descent that gets progressively steeper, ultimately dropping about 200 feet in 1/3 of a mile. I closed the gap, got on Scott's heels and waited for the right time to pounce. At rocky outcropping Scott went left so I moved to the right and put in a surge. He wasn't going to make it easy for me but I barely made it past before our paths converged. I kept hammering the downhill, on the verge of losing control, but this is how I had to run to keep ahead of Scott.

As the trail bottomed out I could see Jeremy up ahead. The next 3/4 mile featured a 250 foot climb up to the summit of Bradbury, this certainly wasn't going to be an easy place to put in another surge but I knew I couldn't get complacent about my position in the race. Scott would take his place back if I gave him a chance. As we passed the picnic shelter there was a crowd of TMR volunteers cheering and this gave me just the motivation I needed. The gloves were off, literally (thanks for picking them up Linda). As we started the climb on the Switchback Trail I had closed in on Jeremy and was only a few paces back. I encouraged him to stay strong, and he was clearly working hard so it wasn't easy keeping up.

By about 1/2 way up the Switchback Trail I could tell that Jeremy was losing a little steam. I stayed on his heels for a few more turns before ultimately taking the tight inside line of a corner and sneaking past. I managed to step it up a notch and open a slight gap before we reached the summit. I figured if I could get far enough ahead to be out of his view I could afford to relax a bit and catch my breath on the flat stretch that followed. We were only 3 miles into the race, still a lot of time for Jerermy, Scott or anyone else to catch me so I had to stay focused.

After summiting there was a short section of trail with 2-way traffic, I got to see Paul, Jerry, Chandra, Kate, Ann and George coming the opposite way and I did my best to offer some encouragement without slobbering all over the place. Speaking and snowshoe racing don't go well together.

When I turned onto the Tote Rd I realized there was only one runner ahead of me on the course, although I never thought for a second that I had any chance of seeing him until the race was over. I pushed on as hard as I could out of fear that someone was going to come up on me. This stretch was pretty flat, not my strength. I channeled the music I had been listening to on the way to the park early this morning:


Eventually the Tote Rd joined up with the Northern Loop and began a gradual climb nearly all the way back up to the summit. At least the Northern Loop had received snowmobile traffic so the footing was pretty solid and I was able to maintain a strong pace going uphill.

The course turned onto the single-track of the Terrace Trail dropping about 200 feet in 4/10 of a mile. I pretty much knew I was safe once I started to descend, this is my favorite trail to run in the park, especially when covered in snow and you can really let loose. The snow was slick and loose, most footfalls ended with a squish and glide but every now and then one foot would sink deeper and throw off my balance. I figured the worst that could happen would be a face plant in the soft snow so I wasn't too worried about losing control. Luckily I did manage to stay upright and from the bottom of the hill it was a mostly flat sprint for another 4/10 of a mile to the finish line. It may have just been my tired legs but it seemed that the footing in this final stretch was some of the worst of the whole course. Just as I wanted to try and kick it up another notch for the finish the snow seemed sloppier and less efficient. 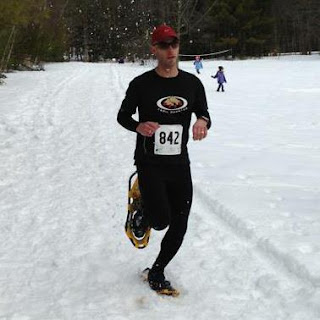 As I entered the field I heard a cheer from the crowd of volunteers and supporters, who had been waiting for quite some time since Jim had come through the finish. My attempt at a final sprint was somewhat thwarted by more soft snow but I managed to stay strong until crossing the line. Definitely a good race for me. It's great to be inspired, pulled and pushed by so many of my TMR teammates. A great day for the team.