February kinda sucked. I had a few good runs, actually a few very good runs. TMR Saturday runs are the best. But my stupid achilles thing has really messed up my training this month as well as my overall enjoyment of running.

Here are the numbers for February

Much worse than January. My plan for the year was to ramp up mileage each month as I train for the WHW, but things are going in the wrong direction. Early in the month I told myself (and a few other people) that if I wasn't 100% pain free by the end of the month that I didn't think I would have any reasonable chance of training for and running the WHW the way I want to, and would therefore not do it. I only ran once in the last week of February and it wasn't pain-free.
Posted by R. Ian Parlin at 11:59 PM 9 comments:

Return to the K9 Loop

I was pleasantly surprised to wake up Sunday morning feeling pretty good, Saturday's run definitely didn't make things worse. I had a busy day and wasn't sure if I'd make it our for a run before sunset but did get out of the house around 3:45, it was just too nice out, I actually wore shorts. Although I had originally thought about getting in 10-15 miles today I didn't want to run after dark and I didn't leave the house prepared for night running so I knew I only had time for about 10. I decided to run the K9 loop, which is a little under 10 but I thought I could bump it up a little. 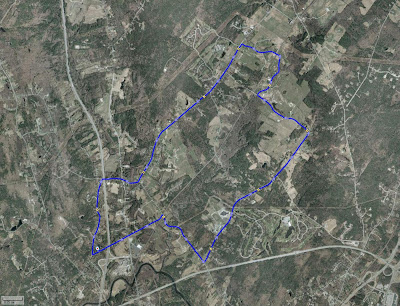 The ankle was feeling pretty good and wasn't really bothered by the hills. My energy level was good but I didn't want to push the pace too much for fear that I might set myself back if I went out too hard. Apart from an emergency bio-break everything went well. Nice to be wearing shorts, but I honestly hope that winter returns and I'm forced to cover my legs for a few more weeks. 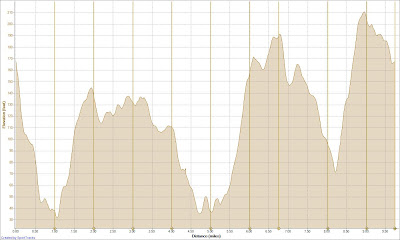 Saturday I was a little apprehensive about what I'd be able to run given how I felt on Thursday. Friday night I did a lot of stetching and rolled my calf/achilles, but despite this I woke up feeling pretty tight. By the time I started my run with Jim and Lily I was feeling okay and things loosened up over the first mile. Conditions were pretty rough and I was surprised that my ankle wasn't irritated by the terrain. of the Beautiful Loop. 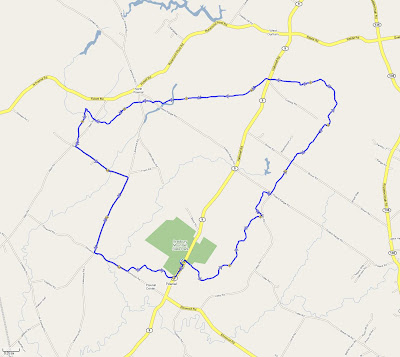 Things were going well, albeit a little slower than last week, until Lily made the unfortunate discovery of an underground cavern hidden beneath a thin layer of ice. She fell in up to her knee and then things got wrenched around a bit. Not good. We decided to take the shortest way back to the park from here, but we were already 8 miles out and the short way was still over 5 miles. We got off the rough trails as soon as we could and ran the last 4 miles back to the park on the roads. 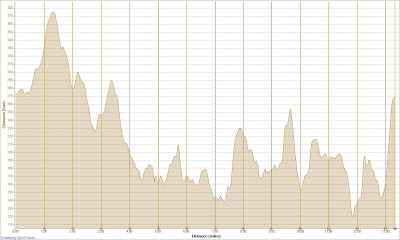 Although I was the tiniest bit disappointed not to complete the whole 15 mile loop I was relieved to finish the run without causing any additional pain. My ankle felt a lot better than it had on Thursday.

Slipping Off The Schedule

Not that I really have a training schedule, but if I did I'm afraid I'd be falling behind. This ankle thing that I didn't think anything of back in December is really starting to hold me back. I had a few good runs last weekend but this week didn't start so well.

Monday was a planned day off, Tuesday I was too busy with work to get out for a run. Wednesday I had a meeting out of town, got dropped off at home after work and then ran back to my office to get my car. There was some definite tightness in my achilles for the first mile, it lingered into the second mile which was all uphill, but then eased off over the next mile which was gradually downhill. After that second mile I had a nice progression of increased speed: 7:47, 7:32, 7:28, 7:22, 7:05. It helped that I had a tail wind.

Unfortunately it seemed that pushing the pace a bit, and then immediately getting into my car and driving home, followed by sitting on my ass eating dinner lead to my achilles tightening right back up again.

Thursday I decided that I needed to get in a short/slow run. I realized that there probably isn't enough of that in my training plan. Earlier in the day I had another session with Dr. Jamie Raymond, he identified a long chain of tightness running from my right glutes to hamstring to calf to achilles. I didn't come away from this visit with such a noticable improvement in my ankle, but I did feel like a few related areas were addressed that will help the ankle.

I set off for my run around 6:00, and about 3 minutes into the run I stopped and considered turning around and walking home because the pain in my achilles was so bad. I stretched for a minute or so, walked a little and then resumed thee run, that seemed to be enough to reduce the pain to a very tolerable level, but it didn't make me feel very good about my long term long distance running goals.

I wanted to get in at least 10 miles today, since I wasn't running the race in Cape Elizabeth I wanted to do my 10 mile "recovery" run following yesterday's 15 mile trail run at Bradbury. I opted for roads to give my ankle a break from the abuse of icy/snowy trails. 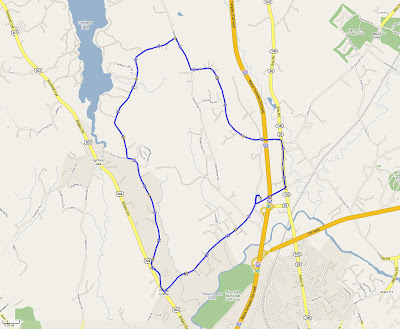 I couldn't resist picking a route that got in some good hills which did aggravate my achilles a bit, but most of the uphill was out of the way by 3.5 miles. 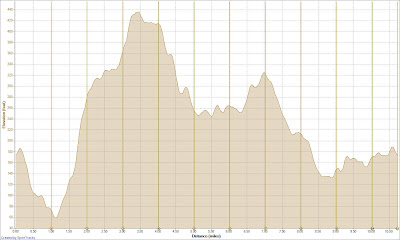 I had originally planned to do this race, but when I realized I didn't have much of a chance of improving upon last year's time I didn't think it was worth it. Different races have different meanings to me, and this one is about running as fast as I can and trying to improve upon my previous time. If I had really wanted to I'm sure I could have focused on shorter, faster runs over the past few weeks and come close to last year, but I'm trying to stay focused on the big picture here of running 95 miles through the Scottish Highlands in June. I don't need a lot of speed for that.

After the recent climax in ankle pain last week I was a little skeptical about being able to get in a decent run this weekend but things worked out better than expected. I took three days off after last weekends 21 mile run, then did an easy 4.25 miles on Thursday which felt okay. Not great, but okay. On Friday I went to see Dr. Jamie Raymond, a chiropractor and runner who has treated a handful of Trail Monsters. He did some manipulation, ART, scraping and kinesio taping, just the right combination to get my ankle feeling a lot better. Not 100%, but much better than when I walked into his office. I'll go back for another treatment or two and that should get me back to normal.

So not knowing exactly how I was going to feel today I set off with the goal of completing the 15 mile Beautiful Loop but had prepared myself mentally in case I needed to turn around early. Jamie, Lily, Sara, Blaine and Erin made up today's group, but by 5 miles it was just me and Jamie, and luckily we were both feeling good (Jamie had also been suffering from an ankle sprain). Up to this point the trails were mostly hard packed snow with a little ice, very runnable and we managed to keep most miles under a 9 minute pace. Actually each mile from 2 to 11 was sub 9, that doesn't sound fast but but it felt like we were moving along pretty quickly over the hilly terrain. 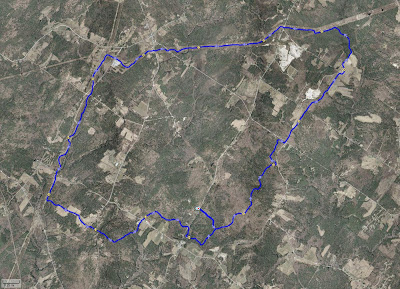 Along the 6 mile stretch of power lines we encountered a lot of ice, stretches of 100 feet or more at times and I was grateful for the IceSpikes I was wearing. A few weeks ago Erik hooked up a bunch of Trail Monsters with free sets if IceSpikes he had acquired and I've now had the opportunity to get in some good miles with them. For years I've been a fan of good old fashioned screw shoes and at first was skeptical of what seemed at first glance to be little more than sheet metal screws in a fancy package with a jacked-up price. But God is in the details:

The deep groove in the head of the IceSpike definitely provides better grip than an ordinary sheet metal screw, I found today that I was able to run across ice, up and down icy hills without any worry of slipping. Today's conditions were actually more icy than I'd ever seen before, and for today's conditions I don't think ordinary screw shoes would have been good enough. The only thing I haven't really tested with these is how they hold up on roads, if they can last through a few road miles on a regular basis without wearing down then I really think they'd be worth the money.

It's also worth mentioning that I put the IceSpikes into a pair of shoes that I had screwed last year and the result is that they didn't stay in place quite as well as I assume they would have if I had screwed a virgin pair of shoes. In three runs totaling about 30 miles I think I've lost a total of 12 IceSpikes. That's my own fault, I suspect the same would have happened if I'd used sheet metal screws. 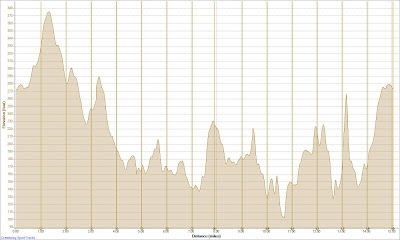 I made the rookie mistake today of not protecting the hose of my hydration pack, within two miles it was frozen and it took another 10 miles for me to get it thawed by shoving the hose down my shirt and wearing my vest over the pack. It was a funny kind of cold today, at times it felt pretty warm and I was sweating pretty heavily, but it was cold enough that my sweat was freezing. Most interesting was the sweatcicle that formed at the edge of my buff, I didn't even notice it until Jamie pointed it out: 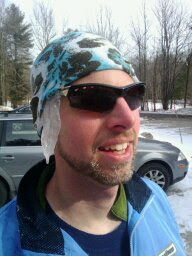 It felt like Jamie and I were moving along at a pretty quick pace for this run, and I was surprised to find that it was only a few second faster than when we ran it 3 weeks ago. We did make fewer stops along the way, so while our running pace wasn't significantly faster our overall time was a few minutes better. I was really happy that my ankle wasn't in any significant pain and certainly didn't slow me down today, even with some of the gnarly terrain we came across.