This isn't much of a race report yet, mostly photos with a few brief descriptions.

I didn't run as fast as I had hoped, but with an average temperature on race day more than 40 degrees warmer than the average temperature of all my training runs, I'm just glad it didn't kill me. The Bull Run Run is a very well organized race, the course is beautiful and very hilly. Pre-race photo. I'm happy because at this point it was only in the mid 60's and I couldn't see all the hills. The course runs upstream, turns at 9.4 miles, returns to the start at 16.6 miles, runs downstream with a few short loops thrown in and then back up to the start. 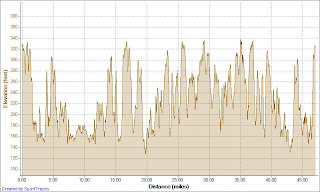 My Garmin (via SportTracks) tells me that there was over 9000 ft of elevation gain, and an equal amount of elevation loss over the course. This was more than I had expected and really took it's toll on my quads. For the last 10 miles I was walking the downhills and moving faster on the ups. photo by Anstr Davidson
Near the 9.4 mile upstream turnaround, the flattest part of the course was found early on in the race. This image is not typical of the terrain. photo by Anstr Davidson
Much of the first 1/3 of the race featured schemes like this with a carpet of bluebells. photo by Anstr Davidson
The upstream turnaround point. Melissa, who is right ahead of me here, should be coming up to run Pineland with her friend Lisa. They both ran good races (finishing ahead me) and provided some good company during the run. Fountainhead aid station at 37.9 miles. This is where I saw my cousin Jon for the first time during the race. He fed me one of my mother's delicious molasses sugar cookies and provided a much needed emotional boost. Heading out of Fountainhead, with a little over 12 miles to go I decided (immediately after this picture was taken) to get rid of my hydration pack and just carry my handheld bottle for the rest of the run. A good decision because my back was getting seriously chaffed. Coming into the Marina Aid Station at 44.9 miles. The finishing stretch where I was able to fend off several runners who had been chasing me and even got ahead at one point during the last mile. photo by Anstr Davidson
The last few strides to the finish line. Congrats Ian! You da man! I heard reports that the heat was pretty bad. Way to tough it out. Really excellent placing and time. You look like you're playing tag with that Melissa girl.

Nice job on a tough course with the heat and humidity. I will have to try this course some day soon, perhaps next spring. And perhaps you can join me at the Vermont 50 this fall.

Rest up and look forward to hearing about your adventure during a trail run soon.

Nice work, Ian! Certainly an effort to be proud of.

Out of curiosity, do you have the sports tracks plugin that uses elevation profiles or is that just what was reported by the watch itself?

great job, ian. it was indeed a tough day, especially for us northerners. last year at bull run was my first 50 miler, and in 2007 (under cloudy 45F-ish skies on perfectly dry trails) i ran more than an hour faster than this year. you should be proud of your accomplishment! also, your map and reporting of cumulative elevation gain would be a boon to the race's web site; please consider offering it to anstr for his future use -- all he needs to do is add aid station icons. (i found your blog searching on "bull run run" + "elevation gain".) wishing you a rapid recovery for your toes and other body parts. happy trails!

It is amazing as I read your blog and follow your accomplishments. Great job with the bull run, as there is a huge difference after training on snow trails cold weather......if only it had snowed that day? You also have the distinction of first Maine finisher.

Hey Ian
Great run especially with the warm temps and 9000 ft of elevation gain. Keep up the good work. I enjoy reading about you and your wife’s training.
Dan

Yup. Your Mom's molasses cookies were damn good! Wicked proud of you cous and no I won't be running beside you next year.